‘Dusking Through Waves’: Wendy Holborow in conversation with Jon Gower 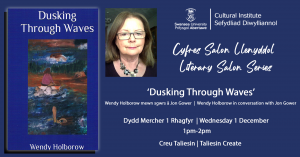 On Wednesday 1 December 1pm-2pm at the Taliesin Create.

Dusking Through Waves is an eclectic mix of short stories written over several years. From the mountains and parks of Wales to the scrub lands of Africa; from Dylan Thomas’ Wales to Lawrence Durrell’s Corfu, some have been placed in competitions and published in reputable literary journals, others have been adapted into stage plays and performed by a professional theatre company. The stories deal with subjects such as domestic violence, loneliness, dementia, war and famine, and love.

Wendy Holborow was born and now lives back in South Wales, UK, but lived in Greece for fourteen years, where she founded and co-edited Poetry Greece. She has won prizes for her short stories, notably the Philip Good Memorial Prize, The Aber Valley Competition, The Island Magazine and most recently a first prize in the Allen Rayne competition. Her stories have appeared in numerous journals. She has completed a Master’s degree in Creative Writing at Swansea University. She has had ten poetry collections published, two children’s novels and a short story collection, Dusking Through Waves. She has also had several plays performed professionally.