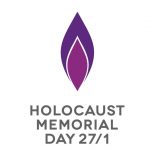 Holocaust Memorial Day is the United Nation’s International Day of Remembrance to commemorate victims and survivors of the Holocaust and Nazi persecutions, as well as other worldwide genocides, including those in Cambodia, Rwanda, Bosnia and Darfur. Between 1941 and 1945, the Nazis attempted to annihilate all of Europe’s Jews through a systematic and planned out attempt to murder, in what is now known as the Holocaust.

By the end of the Holocaust, six million Jewish men, women and children had perished in concentration camps, extermination camps, ghettos and mass-shootings. There were also an additional five million victims of Nazi mass murders including LGBT people, those with disabilities both physical and mental, Slavic people, Romani people, people of different ethnic origin and religious beliefs bringing the death toll to approximately 11 million.

We will be featuring an inspiring talk titled ‘Letters of Love and Loss’ by Francis Morton. Francis will share the story of his parents, George and Renée and how they survived the Holocaust. Renée kept over 500 letters from her family and friends between 1938 and 1945, from which Francis has been able to reconstruct the lives and fate of Renée’s family, most of whom were murdered in the Holocaust. These letters include some from Renée’s then boyfriend, George, from which details of his life story have been uncovered.